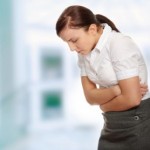 Patient information: Diarrhea in adults (The Basics)
Written by the doctors and editors at UpToDate

What is diarrhea?
— Diarrhea describes bowel movements that are runny or watery, and happen 3 or more times in a day. Diarrhea is very common. Most adults have diarrhea about 4 times a year. Just about everyone has it at some point.

What causes diarrhea?
— Diarrhea can be caused by:
●Viruses
●Bacteria that live in food or water
●Parasites, such as tiny worms that you can catch in some countries
●Side effects from some medicines
●Problems digesting certain types of food
●Diseases that harm the digestive system (figure 1)

Is there anything I can do on my own to get better?
— Yes. Here are some things you can try at home:

●Drink a lot of liquids that have water, salt, and sugar. Good choices are water mixed with juice, flavored soda, and soup broth. If you are drinking enough fluids, your urine will be light yellow or almost clear.
●Try to eat a little food. Good choices are potatoes, noodles, rice, oatmeal, crackers, bananas, soup, and boiled vegetables. Salty foods help the most.
●Take a medicine called loperamide (brand name: Imodium). It is safe if you do not have a fever or bloody bowel movements. Do not take more than the label tells you to. Taking too much loperamide has led to serious heart problems in some people.

Should I see a doctor?
— See your doctor if:

●Your symptoms still aren’t better after 48 hours
●You have had more than 6 runny bowel movements in 24 hours
●You have lots of small bowel movements with blood or mucus
●Your diarrhea is black or bloody
●You have a fever higher than 100.4ºF (38ºC)
●You have severe belly pain
●You are 70 or older
●You have diarrhea after finishing antibiotics
●Your body has lost too much water. This is called dehydration. Signs include:
-Lots of diarrhea that is very watery
-Feeling very tired
-Thirst
-Dry mouth or tongue
-Muscle cramps
-Dizziness
-Confusion
-Urine that is very yellow, or not needing to urinate for more than 5 hours

Will I need tests?
— Many people don’t need any tests at all. But it’s possible your doctor will want to do:

These tests can show whether you have an infection, and if so, what kind. They can also show if you are dehydrated.

How is diarrhea treated?
— That depends on what is causing your diarrhea. You might not need any treatment. If you do, your doctor might recommend:

●Antibiotics – These medicines fight infections.
●Medicines that ease diarrhea, such as loperamide (brand name: Imodium), diphenoxylate-atropine (brand name: Lomotil), or bismuth subsalicylate (brand names: Pepto-Bismol, Kaopectate)
●Fluids through an IV. This is a thin tube that goes into your vein. An IV can help if you have severe dehydration.
●Stopping some of your medicines
●Changing the foods you eat

Can diarrhea be prevented?
— You can reduce your chances of getting and spreading diarrhea by:

●Washing your hands after changing diapers, cooking, eating, going to the bathroom, taking out the trash, touching animals, and blowing your nose.

●Staying home from work or school until you feel better.

●Paying attention to food safety. Few Tips include:
-Not drinking unpasteurized milk or foods made with it
-Washing fruits and vegetables well before eating them
-Keeping the refrigerator colder than at 40ºF and the freezer below 0ºF
-Cooking meat and seafood until well done
-Cooking eggs until the yolk is firm
-Washing hands, knives, and cutting boards after they touch raw food