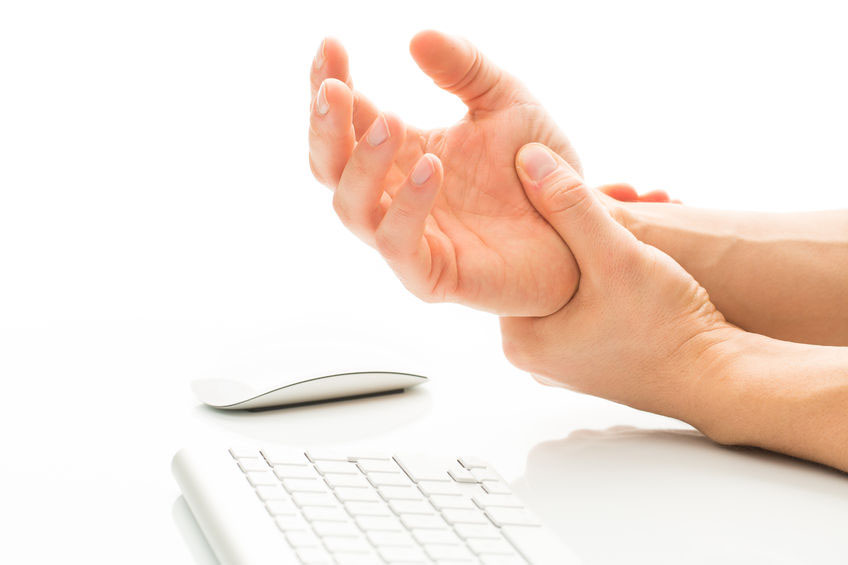 Patient education: Carpal tunnel syndrome (The Basics)
Written by the doctors and editors at UpToDate

The median nerve goes through a tunnel in the wrist that is formed by the bones of the wrist and a tough band of tissue called a “ligament” (figure 1). Experts do not know exactly how the nerve can get pinched, but they think it might happen when: 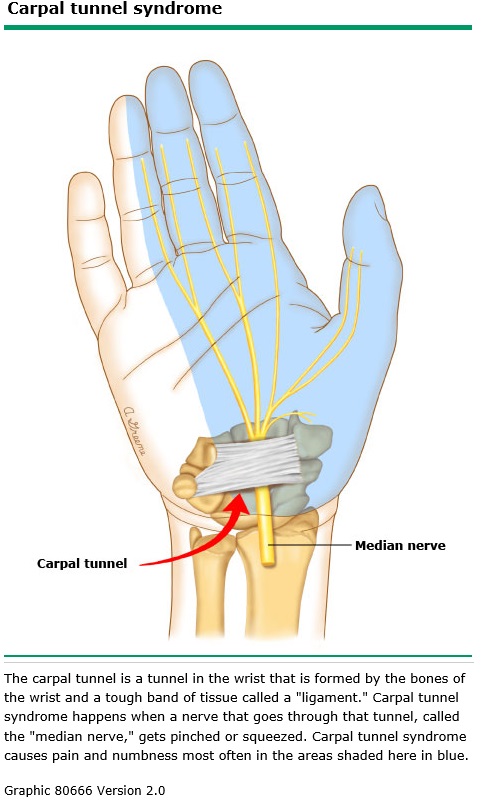 What are the symptoms of carpal tunnel syndrome?
— The symptoms include pain and tingling in the thumb and the index, middle, and ring fingers (figure 1). Often the symptoms affect both hands, but one hand might have worse symptoms than the other.

Symptoms are usually worst at night and can even wake you up from sleep. The symptoms can also flare up when you do things that involve bending and unbending your wrist or raising your arms. Some activities can trigger symptoms in people with carpal tunnel syndrome. But they do not actually cause the condition. Examples include:
●Sleeping
●Driving
●Reading
●Typing
●Holding a phone

In many people, the symptoms come and go. But some people eventually have symptoms all the time. They can end up having trouble moving their fingers or controlling their grip.

Electrical nerve tests can prove if you really have carpal tunnel syndrome. Doctors usually order these tests for people who might need surgery to treat their condition.

●Electromyography – Electromyography, also called EMG, can show whether the muscles in the hand and wrist are responding the right way to electrical signals. This test is most useful in checking whether another condition besides carpal tunnel syndrome might be causing the symptoms.

Should I see a doctor?
— See your doctor if you develop the symptoms described above, and they bother you.

How is carpal tunnel syndrome treated? — Treatments are often combined and can include:

●Wrist splints – Some people feel better if they wear splints at night that keep their hands in a “neutral position.” The neutral position is when the wrist is not bent forward or backward and the fingers are curled naturally toward the palm.

●Steroid shots or pills – Steroids are a group of medicines that control inflammation and swelling. To treat carpal tunnel syndrome, doctors sometimes inject steroids into the carpal tunnel. People who do not want to get a shot can take steroids in pill form instead. But the pills are less effective than the shot.